And no, I'm not talking about the lame modern sideshow wannabes.

It's those that were born different, yet through their own resilience, were able to make a life for themselves, who are truly amazing.
Whether you condemn or condone human oddities and sideshows, those who performed in them have and will continue to be remembered long after you and I are gone.

That said, here's a few of my favorite Very Special People:

Johnny Eck was a fraternal twin. His brother, Robert, was born "normal", but Johnny was destined for a more unique life.
Billed as the "Amazing Half-Boy", Johnny was born with sacral agenesis, a rare condition that involved abnormal development of the lower spine.

At the age of 12 he signed on with magician John McAslan, doing sleight of hand tricks and acrobatics. Later going on to perform with the Ringling Brothers and Barnum and Bailey.
He also lent extra flair to the old "sawing a person in half" routine. His brother Robert acted as an audience plant and went up on stage, but switched places with Johnny and a dwarf who played the bottom half. Once "sawed in half" Johnny would chase his "legs" around on stage.
People freaked right out.

Fun fact: Johnny also played a reoccurring bird character in the 1930 Tarzan films. Due to his physique, Johnny was probably the only person at that time who could play the role.
Johnny Eck eventually passed away at the age of 79 in the same town he was born, Baltimore Maryland.
God bless you sir, and your amazing hand stands.

...Coffey wasn't the first person to perform as a Living Skeleton, but he was probably the best.
Opting to wear stylish three piece suits with vertical stripes, Coffey added a certain elegance that had been absent in similar skeleton acts until then. Taking on a playboy persona, he made it a habit to flirt with the females in the audience, yet joked that "most ladies don't like their Coffey thin."

I also like to think that he was the inspiration for Tim Burton's Jack Skellington.

Originally, Coffey worked as a barber in Ohio. He appeared normal until the age of 29, when he inexplicably began to wither away. Eventually bottoming out at a meager 70lbs.

As a publicity stunt, since his persona was that of a dapper flirt, Coffey fell in love with and married ossified girl, Emma Scholler.

In every town their act traveled to.

But in actuality, he wed one, Mary Curtright, in the late 1890's with whom he had a normal child

In 1905 he retired to Burlington, New Jersey where he faded into obscurity.


Captain Martin Van Buren Bates and Anna Swan
The tallest couple ever recorded, Captain Bates measured 7' 9" and weighed 470lbs, while his bride, Anna, was recorded as 7' 6" tall and 390lbs. (Maybe she's wearing heels?)
Unlike other acts, Captain Bates actually earned his military title. He served the Confederate Army during the Civil War, earning the incredibly original nickname, the Kentucky Giant. You know, because he was a giant... from Kentucky.
After the war ended he traveled to Cincinnati, Ohio and joined a traveling circus as their resident giant. While on tour in Halifax, Nova Scotia he met Anna, a daughter of Scottish immigrants.
Unlike many other circus romances, concocted by promoters to gain publicity, their courtship was the real thing. Eventually they married in London England. Queen Victoria provided the wedding gown and gifted a pair of diamond studded gold watches.
The couple later settled down on a massive farm in Seville, Ohio. Which, to this day, has a "Giant Fest" in September.
Myrtle Corbin

Billed as the "Four-Legged Woman from Tennessee", Myrtle was born with dipygus. An extremely rare condition where the body splits at the torso, forming duplicate limbs, pelvis, and organs.
In layman's terms, Myrtle had a twin sister from the waist down.

An extremely popular performer, she worked for the Ringling Brothers and P.T Barnum, earning over $400 a week.
Show of hands; how many of you make about that much now?
At the age of 19, Myrtle married doctor Clinton Bicknell and had five healthy children.
Although her duplicate legs were too small and weak to be functional, Myrtle did have two fully functional sets of reproductive organs.
This led to a rumor that Myrtle had three children from one set of organs and two from the other. It's possible that the story was concocted by show promoters, hoping to use the shock value to increase ticket sales. Although whether or not it happened, it was medically possible.

Myrtle eventually died in Texas at the age of 60, surrounded by family and friends.

Okay, this guy is just way too cool. He's from exotic coastal South America. Speaks Hindi, English, French, and German. A family man with five kids, who worked in showbiz for 45 years.

And this is pretty neat too:


Prince Randian passed away in New Jersey following a final performance at the age of 63. Presumably still being awesome.

Daisy and Violet were born conjoined twins in 1908 to Kate Skinner, a single barmaid in Brighton, England.
Fused at the pelvis, the girls shared only bone and blood circulation, but no organs.

Their story, however, is a tragic one.
Outright exploitation was not very common on the sideshow and vaudeville circuits. However, Daisy and Violet would prove to be the sad exceptions.

They were purchased as infants by their mother's boss, Mary Hilton. She recognized profit potential in the girls, and began teaching them to perform. Singing, dancing, and playing instruments at a young age. 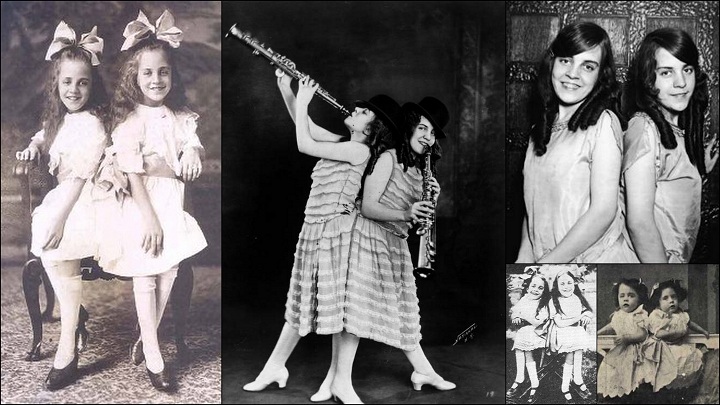 The sisters began touring at the age of three. They were hugely successful, netting large profits for Mary Hilton, her husband Henry, and her daughter, Edith. During this time the twins were mistreated and abused, both physically and emotionally, seen as being only possessions by the Hiltons.
When Mary Hilton died in Alabama, guardianship of the girls was passed to Henry and Edith, who continued their strict control over Daisy and Violet.
When the girls turned 21, they finally managed to break free from the Hiltons. Suing for access to their earnings and ability to operate independently.
They began touring with their own show, "The Hilton Sister's Revue". But now that they had control, when previously they had been strictly controlled themselves, the twins began to self-destruct.
Financial issues and legal problems plagued the girls and their popularity waned.

At the age of 54, Daisy and Violet they made their last public appearance at a drive-in movie theater in Charlotte, North Carolina. It was there that their tour manager abandoned them.

Desperate, the twins found work at a nearby grocery store.
They would remain in North Carolina for the rest of their lives. Residing quietly in a small town outside of Charlotte, weighing groceries.
In January of 1969, Daisy and Violet passed away in their home at the age of 61.
Posted by B.C at 11:38 PM

B.C
Yankee transplant living in the Lowcountry of the American South. Wild, but not crazy.